Ruah in Astoria: Peace First Trusting the Spirit during Uncertainty 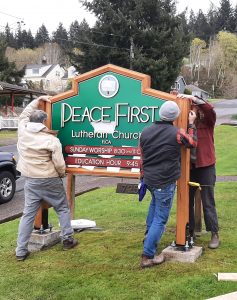 Peace First Lutheran Church in Astoria welcomes visitors to experience the Holy Spirit at its two church campuses in Astoria, Oregon. The upper town campus greets visitors every Sunday with the unmistakable fragrance of coffee brewing, a narthex featuring two large maps of indigenous tribal histories in Oregon, an anti-racism library to the side, and a sanctuary often decorated with artwork created by the congregation. The downtown campus greets visitors with its tall bell tower outside, its stunning stained-glass windows in the sanctuary, and a state licensed childcare facility in its classrooms and adjoining buildings.

It’s a congregation clearly doing the faithful and sometimes difficult work of trusting Ruah (the Spirit) as members discern who they are together and who they’re called to become with their neighbors; work that they are no strangers to. In 2020, Peace First was born from the merger of First Lutheran and Peace Lutheran Churches as the result of a changing congregational landscape across the state. While a challenging journey, Peace First is learning to trust their newly formed muscle memory: there is opportunity in transformation and beauty in expanding community.

When Pastor Steve Kienberger was called to First Lutheran Church in Astoria, he knew that conversations had been in the works since 2006 with their sister congregation in Astoria, Peace Lutheran Church, to merge congregations in the future. With both congregations having gifts, skills, and resources to offer each other, they found mutual benefit in coming together. Located right in the heart of Astoria, Peace Lutheran had one of the city’s only state-certified early learning centers, intentional and authentic focus on LGBTQ+ inclusion, and a cultural heritage different from First Lutheran’s. First Lutheran was in a relatively stable financial position with its own history, and members brought open hearts to engage in a process of discovery with the Holy Spirit.

After years of conversation, in June 2019 Peace Lutheran’s pastor retired and the congregations felt led by the Spirit to move forward with merging together. When the COVID-19 pandemic hit Oregon shortly after, the intended period of relationship building and community development between the two congregations through coffee hours, meals, and story sharing, turned into one of Zoom meetings, surveys, and online polls. A challenge to say the least, many wished they had more opportunities to get to know their new community members on a personal level; and yet, they remained committed to the process and journey with each other, the synod, and the Spirit. Their committees began to come together, learning from each other’s methods and practices. They worked hard to collectively name the new congregation in an honoring and inclusive way. They sat together writing minutes, working on proposals, and learning how each church uniquely operated, putting the best practice together for the newly merged Peace First congregation. 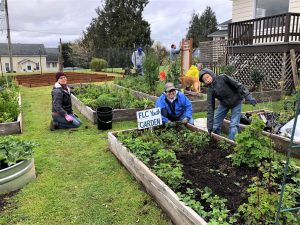 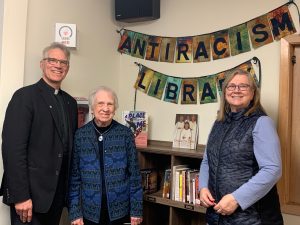 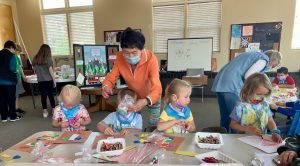 Since becoming one congregation, Peace First has become accustomed to faithfully exploring the Spirit Jesus promises, even in the midst of the unknown. The experience gained in the merger supports them as they navigate complex and difficult social realities together. For instance, after reading the book Dear Church by Lenny Duncan, the congregation decided to take seriously the book’s call to hold anti-racism training for church leadership and they became participants in the Interfaith Movement for Immigrant Justice (IMIrJ) cohort: Countering White Nationalism. After George Floyd was killed and in the wake of that tragic injustice, the congregation doubled down on their commitment to learn. They began navigating how to engage in conversation and protest, passed a proposal to start an anti-racism committee, studied the Sacred Ground curriculum with their neighbors at Grace Episcopal, and eventually joined the Reckoning with Racism Cohort in partnership with the Oregon Synod through Common Table of Oregon. Currently, they are in the second year of their church anti-racism leadership classes, and in the fall, they plan to bring these classes to more of the Astoria community. The merging process has helped Peace First become more engaged with the histories of the lands they steward; the lands where both the original First Lutheran and Peace Lutheran Church buildings stand, the Native populations who originally stewarded those lands, the racist histories of those lands, and their own role in the history of it all. In addition, this process has heightened the newly merged congregation’s focus on LGBTQ+ inclusion, including participating in the local Pride parade.

“As imperfect as we are, we are trying to deal with our heritage and racist histories. We are not models for anything. We are simply muddling through and trying and trusting. We are happy to help muddle through with the Spirit and the synod.” – Pastor Steve

Ambiguity is hard. How can a community learn to trust Ruah together through the holy whirlwinds of change and transformation?  According to Peace First leadership: constant honest communication, faith that relationships are worth the work, and hearing and respecting the Spirit embodied in our neighbors who have asked us to see, hear, and love one another.

The truth is many congregations are at the crossroads of an unknown future. Half of our Lutheran congregations in Oregon have part-time clergy. Our local communities are in flux. Looking forward can be scary, daunting, and challenging. And yet, as a synod, we are called to be on the way with one another and our neighbors, trusting in the liberating Spirit Jesus promises as we center Christ’s love in relationship and unlikely friendship. Through these powerful intersections we can trust Ruah will birth new life among us. As the Oregon Synod, we commit to accompanying congregations through the discernment of such creative and transformational transitions.

Are you ready to join this courageous journey together?

You can give online here!

Individuals can send a check to the Oregon Synod office: 2800 N Vancouver Ave. Portland, OR 97227. Please make checks payable to the “Oregon Synod.”

A monthly series highlighting stories from across the wild web of relationships and ministries that make up the Oregon Synod. Each month we share examples of how Christ’s love is being embodied in ministries just like yours. We are excited to highlight the amazing life emerging across Oregon Synod congregations, ministries, & relationships. Check out the entire series!