A celebration of women’s contributions to history, culture and society and has been observed annually in the month of March in the United States since 1987. International Women’s Day, is a global celebration of the economic, political and social achievements of women, took place for the first time on March 8, 1911. Many countries around the world celebrate the holiday with demonstrations, educational initiatives and customs such as presenting women with gifts and flowers.

In 2013, Elizabeth Eaton became the first woman to be elected as the Presiding Bishop of the ELCA, the highest position of authority within the church.

In 2016, women clergy were nearly twice as likely as men to have part-time calls.

In 2018, a record number of 6 women were elected as ELCA bishops in a calendar year. This group included the first African American female bishops, Patricia Davenport and Viviane Thomas-Breitfeld.

In 2018, the numbers of women and men preparing for ministry in the seven ELCA seminaries are about equal.

In 2019, Bishop Laurie became the first female bishop elected to the Oregon Synod. 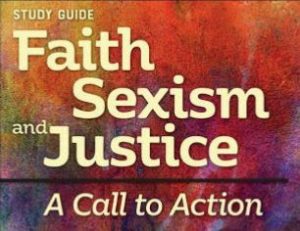 Faith, Sexism, and Justice study guide. featuring six flexible sessions that can be customized for in-person gatherings or virtual meetings. Each session incorporates prayers, videos, engaging activities, Scripture study and invitations to live out the call to gender justice in the world.

“What Is Meant by Inclusive and Expansive Language in Worship?”

Women of the ELCA

Lutheran World Federation Women’s Empowerment and Gender Justice network works toward the full participation of women in the communion’s life and pursues this commitment at all levels of the federation. The ELCA is a member church of the federation and works collaboratively to support global gender justice. Explore the LWF Gender Justice Policy – the first of its kind.