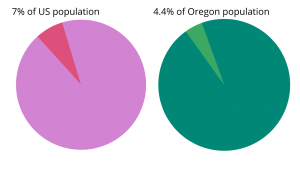 Racism against Asians in Oregon History

1860’s: large numbers of Asians, primarily Chinese, began to arrive in Oregon mostly to mine and construct railroads.

1862: Oregon adopted a law requiring all Blacks, Chinese, Hawaiians (Kanakas), and Mulattos residing in Oregon to pay an annual tax of $5. If they could not pay, the state put them into service maintaining state roads.

1866: The Oregon state legislature banned interracial marriages to prevent whites from marrying anyone Black, ¼ or more Chinese, or Hawaiian, and ½ or more Indian.

Established in 1871 The Kam Wah Chung and Company store operated during the height of Grant County’s influx of Chinese miners and laborers (1870-1910). It was started by three Chinese Oregonians and served as grocery, dry goods store, temple, joss house, unofficial post office, library, business and interpretive center, contract labor pool, automobile dealership, social club, dormitory, apothecary, and clinic in John Day. The Kam Wah Chung State Heritage Site and museum was opened in John Day in 1977 and refurbished in 2008. Work on a new Interpretive Center and Collections Building is planned to begin in 2022.

1880’s: Chinese immigrants, the largest ethnic minority in Oregon, were driven by mobs out of Oregon City, Mount Tabor and Albina. Many of the over 9,000 Chinese living in Oregon felt compelled to move into sections just outside city centers to establish China Towns for their protection and commerce.

1882: Congress passed the Chinese Exclusion Act, the first law to precent a specific racial/ethnic group from immigrating to the US. It created an absolute moratorium on Chinese immigration, (made permanent in 1902). It made all Chinese immigrants ineligible for citizenship even if they were born in the U.S. It also barred them from several professions.

1886: members of the “Anti-Coolie League” burned the homes and Chinese markets and dynamited two laundries before giving all Chinese 30 days to leave Portland. Even though the mayor activated the militia and police to intervene against the threats, many Chinese returned to China or migrated to San Francisco to leave the hostile environment in Oregon. (“Coolie” is racial slur for poor Asian laborers.)

In 1887, a brutal massacre and theft near Enterprise, Oregon that killed at least 34 Chinese gold miners before mutilating their bodies. After a trial (and acquittal) that attracted little attention from the press, the local white community swept the mass murder under the rug for more than a century.  In 1995, a county clerk opened an old safe in the Wallowa County Courthouse and found a long-secreted cache of documents detailing the white community’s complicity with the massacre.

1890’s: banning Chinese immigration contributed to a dramatic increase in Japanese immigrants to Oregon: typically, young males arriving without families. They came to work on railroads, in lumber and canning industries and as farm workers. Many restaurants and businesses posted signs reassuring customers that they employed no Asian help.

1907: the U.S. and Japan formed a “Gentleman’s Agreement”. Japan ended issuance of passports to laborers and the U.S. agreed not to prohibit all Japanese Immigration. Only certain “types” of Japanese could come: educated and middle/upper classes.

On March 21, 1910, a violent riot took place in the heart of St. Johns, during which two hundred local residents, including prominent members of the community, attacked the town’s East-Indian population. By the end of the day, the majority of the town’s East Indian population were forcibly placed on trains and sent south to Portland. Most of the East Indian workers returned to St. Johns where they would wage a two-year legal battle against their attackers. Very few of the accused were convicted, and those that were received light sentences.

1917: Immigration Act prohibited the entry of immigrants who were “induced…to migrate to this country by offers or promises of employment”, imposed a head tax and excluded “immigrants over 16 who could not read in any language.” Provisions banned almost all Asian immigrants.

1920’s: Oregon Klan leaders claimed 35,000 members in more than 60 local chapters with tens of thousands more sympathizers who were not official members. Oregon’s Governor from 1922-26, Walter M. Pierce, though not a member, was overtly supported by the Klan and he promoted the Klan’s agenda.

1922: The Supreme Court of the United States ruled in Ozawa v. United States that first-generation Japanese, born in the US, were not eligible for citizenship and could not apply for naturalization.

1923: The Oregon State Legislature, dominated by members of the Klan, passed a number of restrictive laws. The Alien Land Law prevented first generation Japanese Americans from owning or leasing land. The Oregon Alien Business Restriction Law allowed cities to refuse business licenses to aliens (especially Japanese & Chinese) for the operation of pool halls, dance halls, pawnshops, or soft drink establishments. The law also required grocery stores and hotels run by “aliens” to publicly advertise their nationalities, thereby enabling customers to choose which businesses to discriminate against on the basis of race and ethnicity.

Bhagat Singh Thind, an Oregon WWI veteran was denied U.S. citizenship. The Supreme Court unanimously ruled that he could not be a naturalized citizen. Anthropologists defined people of India as “Caucasian”. A previous ruling had affirmed that immigration law referring to “White” meant “Caucasian” so as to deny citizenship to light skinned Japanese people. In this case, they argued that the “common man’s” definition of “White” did not mean all “Caucasians”. Even though people from India were considered “Caucasian” they were not “White.” Thus, the color of skin became the legal qualification for citizenship in the United States.

1924: In response to growing public anti-immigrant feelings including anti-Asian riots in Bellingham and other Pacific coast communities, Congress passed a restrictive Immigration Act of 1924 and a National Origins Act limiting immigrants to 2% from any particular nation based on the 1890 Census. Nativists, who believed they were the true “Native” Americans despite being descended from immigrants themselves, hoped to maintain the perceived White racial and ethnic “purity” of the United States.

1927: the Oregon State Constitution was finally amended to remove a clause denying Blacks the right to vote and eliminating restrictions that discriminated against Blacks and Chinese voters.

1941: Japan’s attack on Pearl Harbor, Hawaii, galvanized the U.S. war effort leading to declaration of war. Claiming national security concerns, the U.S. military and government rounded up and incarcerated over 1,000 Japanese American community leaders with little attention to their rights as residents of the U.S. territory or evidence of involvement in Japan’s actions

1942: Executive Order 9066 authorized detainment of people deemed national security threats due to their race/ethnicity. It applied to residents of Italian or German heritage, but Japanese Americans suffered far more. Over 110,000 Japanese Americans were held behind fences, with armed guards in hastily built internment camps in remote locations. For the next 2 ½ years, legal residents and citizens of the U.S. of Japanese ancestry endured extremely difficult living conditions and poor treatment by their military guards. Many joined the armed forces to demonstrate their patriotism and get out of the detention camps.

1942: A Japanese submarine shelled Fort Stevens near Astoria. It is the only hostile shelling of a military base on the U.S. mainland during World War II. Also, a Japanese submarine launched seaplanes that dropped bombs on the southern Oregon coast. Incendiary (fire) bombs were to cause fires in the thick Siskiyou National Forest. These attacks increased racism against Asian-Americans.

1942: all persons of Japanese heritage, whether U.S. citizens or immigrants, living in the western portion of Oregon (and all western states) were forced to move to camps by the Wartime Civil Control Administration. More than 4,500 Japanese Americans from western Oregon were sent to internment camps: 2/3 were American citizens

1943: the Magnuson Act of 1943 repealed the Chinese Exclusion Act of 1882, establishing quotas for Chinese immigrants but also making them eligible for U.S. citizenship.

1944: balloons launched from Japan, carrying explosive and incendiary bombs, drifted on the jet stream to the U.S. The goal was to start forest fires and devastation. Oregon had 45 balloon incidents. Balloon bombs caused the only deaths due to enemy action on the U.S. mainland during World War II creating increased fear and suspicion of people of Japanese descent in Oregon.

1944: Federal government’s Public Proclamation No. 21 ended the exclusion of people of Japanese descent from the Pacific Coast.

1945: Oregon passed Joint Memorial No. 9, calling on President Roosevelt to prevent the return of Japanese Americans “for the duration of the present war with Japan.” The request was based on what they described as “considerable antagonism to such return”. It claimed that the internees would be “safer and cause less civilian disturbance in the relocation centers.”

1945: internees who returned to their homes were often met with open hostility by white neighbors. Some found their homes looted and their farms vandalized while others endured boycotts of their products or heard racial slurs or threats. Some were assaulted physically. The Oregonians who welcomed and supported the returning Japanese Americans also incurred hatred and violence directed at them for their support.

1945: Hood River received national attention when the local American Legion Post removed the names of 16 “Nisei” (born in the U.S. of parents who were immigrants from Japan) members of the U.S. military from a plaque honoring local armed forces.

1946: The War Bride Act and the G.I. Fiancées Act allowed immigration of foreign-born wives, fiancés, husbands, and children of U.S. armed forces personnel. Spouses from Europe were more welcomed than those from the Pacific Theater of War.

Born in Portland, Hazel Ying Lee overcame both racism and sexism to become the first Chinese American woman to fly for the U.S. military during World War II—as part of the Women’s Airforce Service Pilots. It took over 30 years to secure military status and veteran’s benefits for Lee and the other women pilots. In 2010, Lee and all other WASP pilots, whether living, deceased, or killed during the war, received the Congressional Gold Medal.

1952: The Immigration and Nationality Act allowed individuals of all races to be eligible for naturalization, but the act also reaffirmed a strict national origins quota system and introduced a system of preference based on skill sets and family reunification. Hundreds of Oregon Issei, those born in Japan, applied for citizenship after Congress lifted the ban.

1953: With passage of a statewide public accommodations law, overt discrimination in public places was banned in Oregon for the first time. Businesses had to remove their racist signage that had limited and segregated access to public places.

1965: The Immigration Act of 1965 abolished the prior quota system. Instead, it created a ceiling of 270,000 immigrants per year with no more than 20,000 per country. Preference was given to immediate families of immigrants and skilled workers.

1980’s and ‘90’s: Oregon had the distinction for the largest Skinhead Movement in the country.

1999: The Oregon legislature held a Day of Acknowledgement to recognize past discrimination earlier legislatures had sanctioned.

2020: Hate crimes against Asian Americans rose by 150 percent during pandemic.

2021: According to the FBI, the top domestic violent extremist threat comes from “racially or ethnically motivated violent extremists, specifically those who advocate for the superiority of the white race.”

We the Association of Asians and Pacific Islanders-ELCA call on our church to once again unequivocally denounce racism by taking immediate actions to defend, protect, and uphold the safety and lives of Asian Americans.

ELCA Day of Lament against racism in response to AAPI statement:
PDF and Word formats.

If you would like to suggest resources to add in email Jemae, Oregon Synod office administrator.