History of Racism in Oregon

For thousands of years, more than 60 tribes lived in Oregon’s diverse environmental regions. At least 18 languages were spoken across hundreds of villages. Natural resources abounded. After thousands of years of history, life as the native people knew it was upended in just a few short decades.

Today, there are nine federally recognized tribes of Oregon: 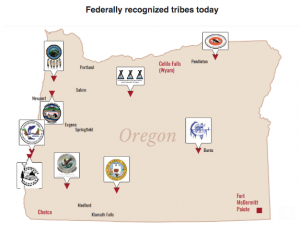 In the late 1800s, what are known as Indian boarding schools could be found across the country and in the Pacific Northwest. Beginning with the Indian Civilization Act of 1819, the United States enacted laws and implemented policies establishing and supporting Indian boarding schools across the nation. The purpose of Indian boarding schools was to culturally assimilate Indigenous children by forcibly relocating them from their families and communities to distant residential facilities where their cultural identities, languages, and beliefs were to be forcibly suppressed. For over 150 years, hundreds of thousands of Indigenous children were taken from their communities.

On June 22, 2021, Deb Haaland, the first Native American to serve in a cabinet position as the U.S. Secretary of the Interior, announced a Federal Indian Boarding School Initiative, a comprehensive review of the troubled legacy of federal boarding school policies.

“The Interior Department will address the inter-generational impact of Indian boarding schools to shed light on the unspoken traumas of the past, no matter how hard it will be,” said Secretary Haaland. “I know that this process will be long and difficult. I know that this process will be painful. It won’t undo the heartbreak and loss we feel. But only by acknowledging the past can we work toward a future that we’re all proud to embrace.”

Watch the Oregon Experience documentary “Broken Treaties,” and listen as native Oregonians reflect on what has been lost and what’s next for their tribes.

Discovered? Or Stolen! Repudiating the Doctrine of Discovery

Proud To Be (Mascots)

It is believed that settlement of North America and the Pacific Northwest began several thousand years ago when indigenous people from Asia made their way to the American Continent. Here in the Northwest, they discovered the mild climate and economically rich forests, prairies, wetlands and rivers. They also discovered an abundance of mammals, waterfowl, fish and plant life that developed and grew over thousands of years.

By the time Europeans made contact with these inhabitants in the late eighteenth and early nineteenth centuries, the area we now call Portland was one of the most densely populated of the North American Pacific Coast. Most of the Portland Basin was inhabited by Upper Chinookan speakers, including the Clackamas and Multnomah peoples. The area known as Washington County was inhabited by Kalapuyan-speaking Tualatins and Salish-speaking groups clustered near St. Helens.

The Oregon Synod respectfully acknowledges that our offices are on the ancestral homeland of the Chinook, Cowlitz and Clackamas nations. In 1851, 19 local tribes signed treaties with the federal government in good faith, but Congress ratified none of them.  We further acknowledge that the territory covered by the Oregon Synod is on the ancestral homeland of at least 27 native tribes. We offer our respect and gratitude to the people who were the original stewards of this land.

If you would like to suggest resources to add email Jemae.