News and Events for the Oregon Synod

Click on the link below to listen to the full interview.

Listen to "First Woman Bishop" on Spreaker.
Incorrect slider name. Please make sure to use a valid slider slug.

On December 14, 2019, Laurie Larson Caesar was installed as bishop for the Oregon Synod  by ELCA Presiding Bishop Elizabeth Ann Eaton.  The event was held at Trinity  Episcopal Cathedral in NW Portland.  It was an ecumenical and interreligious service with blessings from representatives from the Yakama Nation, the Sikh, Jewish and Muslim communities.  Here are links to two news articles:

Check Out Pics from the Whirlwind Tour!

Our ancestors focused much attention on strangers, aliens, foreigners, those fleeing persecution. Central to the self-understanding of all who hold the Hebrew scriptures as sacred is this line from Exodus:

Except for our Native American kindred, we US citizens were all once strangers in a strange land. The recent declaration of the ELCA as a sanctuary church body is one more way that we are seeking to recognize that, and to live into our deepest values as followers of Christ’s Way. It is a statement that says to our undocumented neighbors, “You matter. We see you. We stand by you.” One undocumented friend of mine said, through tears, “You have no idea what this means to me. Sometimes, with ICE raids happening all around me, I feel like all White people hate us.” There will be no one correct way to do this. I was honored to be able to stand up at the recent ELCA Churchwide Assembly as the Bishop of the Oregon Synod, the first synod to declare itself a sanctuary synod, and say, “This action does not demand that any congregation, synod or ministry engage in civil disobedience or illegal action. Instead, it declares to the world that we stand in solidarity with those who are loved by God but remain at the margins of our culture. Instead, it invites each church and synod to discern its own place in God’s welcome to all. Some will physically house those in danger or protest at ICE facilities, but many more will pray for the children separated from parents, provide food or assistance to the hungry at the border, offer citizenship classes for their neighbors, visit the detained or write letters to legislative leaders.”

For some of us all this may be unsettling. We may never agree. But as children of God, which is who we are, we are loved by our Creator even when we disagree.

So then you are no longer strangers and aliens, but you are citizens with the saints and also members of the household of God, built upon the foundations of the apostles and prophets, with Jesus Christ himself as the chief cornerstone.

The Time to Act is NOW

On Monday, August 19, community leaders gathered on the steps of the Washington county courthouse to stand in solidarity with the victims of the recent mass shooting sin El Paso, Texas and Dayton, Ohio.

Watch as these leaders responded to the troubling rise in hateful rhetoric and violence that are deeply rooted in racist ideology, and reaffirm the strength of diversity in Washington County.

Standing Up for Immigrant Rights

Bishop Laurie was one of over 300 leaders who turned out at the Washington County courthouse in Hillsboro on Monday, August 12, 2019 to advocate for our immigrant neighbors. People of faith, legal advocates, and legislators came together to say that everyday ICE is allowed to operate in our courthouses is another day where members of our community are at risk of being racially profiled, pepper sprayed, or harassed.

Rally attendees also stood in solidarity alongside Isidro Andrade-Tafolla who was racially profiled by ICE agents during an IMIrJ vigil at the courthouse almost two years ago. The interaction was caught on video by ACLU legal observers. From the center of the circle, Isidro and the ACLU announced that they are filing a claim against ICE.

Want to add your voice to the cry to remove ICE from our courthouses? Please send an email, letter, or postcard to Chief Justice Walters sharing your concern and inviting her to join our circle of protection! See instructions here.

ELCA as a sanctuary church: what does this mean?

As many of you know, last week the ELCA Churchwide Assembly adopted a resolution that, among other things, declared the Evangelical Lutheran Church in America (ELCA) a sanctuary denomination. Many of you are asking, “What does this mean?”

Our call to love our neighbor is central to our faith. In our baptismal covenant we promise to strive for peace and justice in all the world. One of the ways we live out this vow is through our commitment to welcoming the stranger. With this declaration, we publicly state that walking alongside refugees and immigrants is a matter of faith.

We have prepared talking points to provide a better understanding and further clarification on what sanctuary means for you and your congregations. We acknowledge this will look different in different contexts across the ELCA.

We also hope this resource will help guide conversations with your parishioners and your community about what our faith says about immigration.

“Welcome one another, therefore, just as Christ has welcomed you,
for the glory of God” (Romans 15:7).

2019 also marked the election of the first female, Laurie Larson Caesar, to hold the office of bishop for the Oregon synod! In fact, all the bishops elected in 2019 are women! 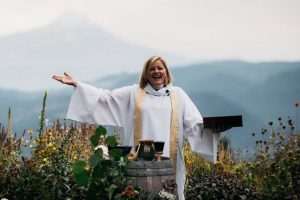 I am honored to be stepping into this role, honored to be walking with you into God’s future. Here in Oregon, we have some of the most innovative, relational and faithful lay leaders, pastors and deacons in the ELCA. I am passionate about supporting you as together we seek to love courageously, live authentically and reflect prophetically the liberating, living Word. The work ahead calls us to be collaborative and creative. The work ahead calls us to be bold and outward-focused. The work ahead calls us to truly believe that love of God and love of neighbor is at the center of what it means to be followers of Christ. Martin and Katie Luther trusted that God’s revelation comes often precisely where we least expect it – the forgotten, vulnerable corners of our souls and of our world. Let us be brave in the work of love, going to the corners that make us feel most uncomfortable, trusting that perfect love (in Greek, that translates to “full, mature and grounded love”) casts out all fear. Bishop Laurie

An Open Letter to the Oregon Legislature

In the late 1990s the Federal Government threatened water rights to the Little Walla Walla River because Steelhead and Bull Trout were listed as a threaten species. I was a pastor in Milton-Freewater at the time. Those of us who understand the complexities of rural agriculture can imagine the chaos this threatened. Local irrigators, and our church, began to build a coalition which included the Tribes, various government agencies, diverse environmental groups and more. We found a solution and a way around the crisis. Cooperation was the key.

In 2008 I was asked by Gov. Kulongoski to sit as a faith community representative on his State Climate Change Integration Group. State agencies were there. Scientists from Oregon Universities were there. Individuals from the private sector participated, Weyerhauser, the Family Farm Alliance, Intel, the Climate Trust and Public Utilities. Did we all share a concern for Oregon forests? Of course! Did we want to move the state from coal burning energy sources to wind and solar? Yes, but to do so you have to run power lines through forest and grasslands. How were we going to do that? Conversation was key, and look at the Columbia basin today.

The Associated Press reports today that 11 Oregon lawmakers who fled the state to avoid the cooperation and conversation that we elected them to engage in are now claiming victory in the defeat of HB2020. “Our mission was to kill cap-and-trade,” Baertschiger said. “And that’s what we did.”

HB2020 would have had Oregon declare a state of emergency around climate concerns that desperately need attention. Its goal was to “dramatically reduce greenhouse gases by 2050” through a cap and trade regime yet to be wholly defined. Those who are watching the science wholly understand the state of emergency we are, undeniable, in. A 2050 reduction goal is 20 years too late. We know this, but it would have been a start.

Is this a difficult issue? Absolutely! Is it going to cost us? All of us? Without a doubt. Is a Democratic super majority frustrating to Republicans? I get that. However, grinding needed conversation and action to a halt is anything but a victory.

Those of you in our state legislature have been given a trust by the people of Oregon. It’s a hard job. I respect that. It is likewise the job of faith communities like mine to support your work and speak up when you have failed. I am doing my job. Leaving the state to avoid doing yours is a catastrophic failure. My prayers for renewed integrity in office will continue.